If you have a bicycle and you have a road - any road - and why not? It's a beautiful world, especially when you are rolling along on a bicycle, slow enough to smell the roadside flowers, to see the little animals running for the ditch, to hear birds singing. The cattle watch you as you pass, then go back to munching the fragrant grass. There's a little stream! Perhaps there are fish? Where will you stay tonight? A nice hotel? A hostel? A campground? Or will you throw down your gear in the wild and sleep under the stars? 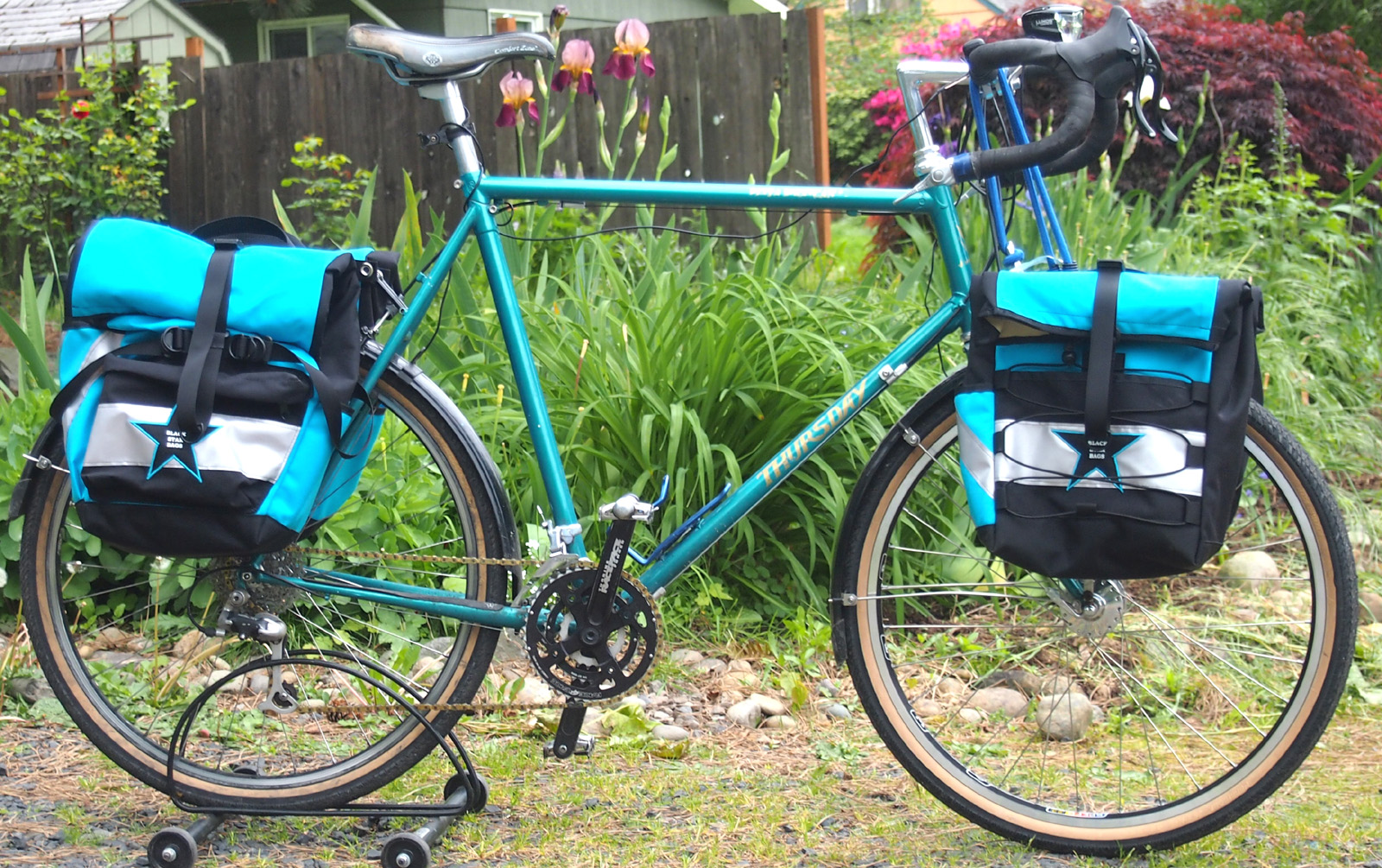 A "Camino Duro" breakaway bike with a set of Black Star bags. Aren't they gorgeous?

Thursday has been making Pista Mexicana, and Rapide/Black Shadow, , sporting road frames for years. But it was so much fun riding in the dirt, racing BMX, cruising around on that 26 ….

Life has a way of throwing change at you. The move to Oregon, that crash at the track in 2014 that ended my BMX career, the call of the wild. It's time for something new! Something old, actually. I've taken road trips on my bicycle since I was a kid, in the US, California, Hawaii, in Europe, in Thailand. It was usually on whatever bike I had at the time. So what did I learn? First of all, that sports geometry doesn't quite cut it for loaded touring. What did I do with this knowledge?

Yes, it can be a hard road to ride, especially loaded down. This model started its life when I was promoting a bicycle tour of Italy's back roads, with my son and daughter. I wanted to build bikes that we could break down and check through luggage on the plane. The bikes had to be set up for moderately loaded touring and have wide, tough tires to handle the white gravel chips the Italians use on their country roads. Strade bianche, they call them.

I stretched the Pista Mexicana geometry a little bit, added tire clearance, a stout front fork and every braze-on known to man. On the advice of world bicycle travelers, I went with 26-inch (559mm) wheels, because you can run a wide tire and can buy replacements everywhere. For breaking down the bike, I chose Tom Ritchey's "breakaway" system. The system includes a set of coupling lugs that break at the bottom bracket and seat cluster, fittings that allow uncoupling the cables, and a really nice-looking suitcase for the bike.

It is a lot tougher to build than the usual S&S couplers you see on takedowns. However it looks real clean.

I beat the prototype bike pretty hard, trying to loosen it up or break it. I couldn't do it by just riding it hard, loaded, on tough roads and streets. Maybe if I threw it off a bridge?

TheRitchey website makes it look like breaking the bike down and packing it is a piece of cake. Maybe it is, after the fifteenth try or so. I've got to the point where I can pack the bike or assemble it in maybe 40 minutes. I did find that it helped to take off the racks and the drive side crank arm.

The maximum allowed size for airline check-in luggage is a combined length + width + height of 62 inches. LWH for the Ritchey bag is about 65! But it doesn't look as big as it is and it LOOKS like luggage. So far I have had no problems checking it through. It has sailed through checkin for US domestic flights, international flights and domestic flights in Thailand.

Here's a typical build, a 59cm frame. Start with the heart of the bike: 10.7 inch (27.1 cm) bottom bracket height (57mm drop) with a 72.5-degree seat tube angle. Chainstay is 44cm, top tube is 60 cm, steering angle is 72 degrees. I raked the fork 46 mm to give that particular bike about 52mm trail. This is a number that works for me, but is a point where the client must choose wisely. A lot of French-style touring bikes use very low trail numbers, under 40mm, to give the bike spirited handling in spite of heavy loads on the front. The Rando guys swear by this; I'll believe it once I've tested the concept myself.

Of course, Camino Duro is a custom build. Geometry will be a matter of fitting your body, riding style, and your personal choice. If you really need a full-on custom build, go here and see what is involved.

Camino Duro can be built as a fillet brazed frame or joined with silver-brazed lugs. The base frame uses lightweight, oversize heat-treated chrome-moly tubing, typically Columbus Zona or True Temper Verus, along with your choice of “tailor made” or custom-bent chain and seat stays. This frame is built for the long haul, but is not as heavy as one would expect. 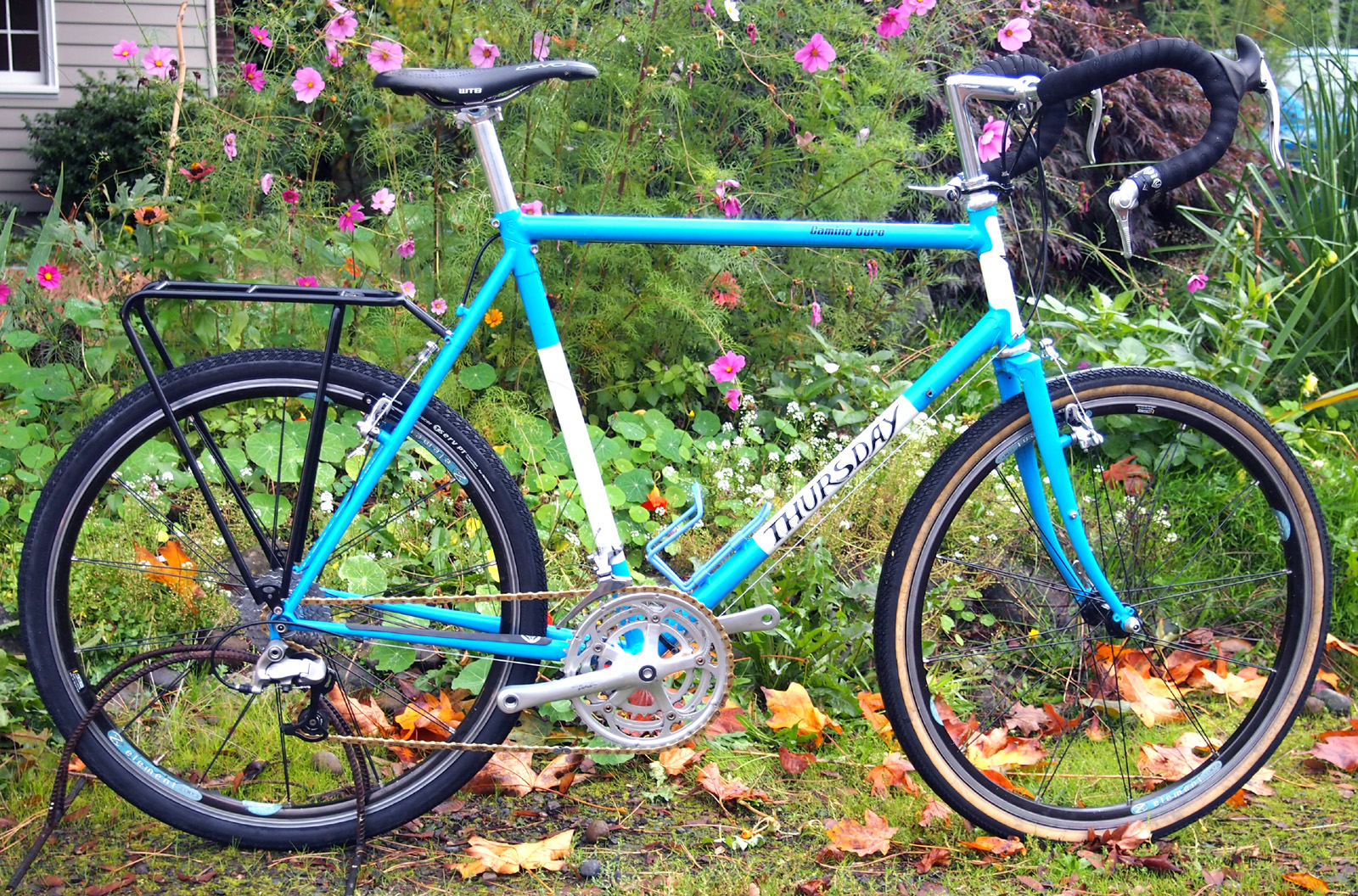 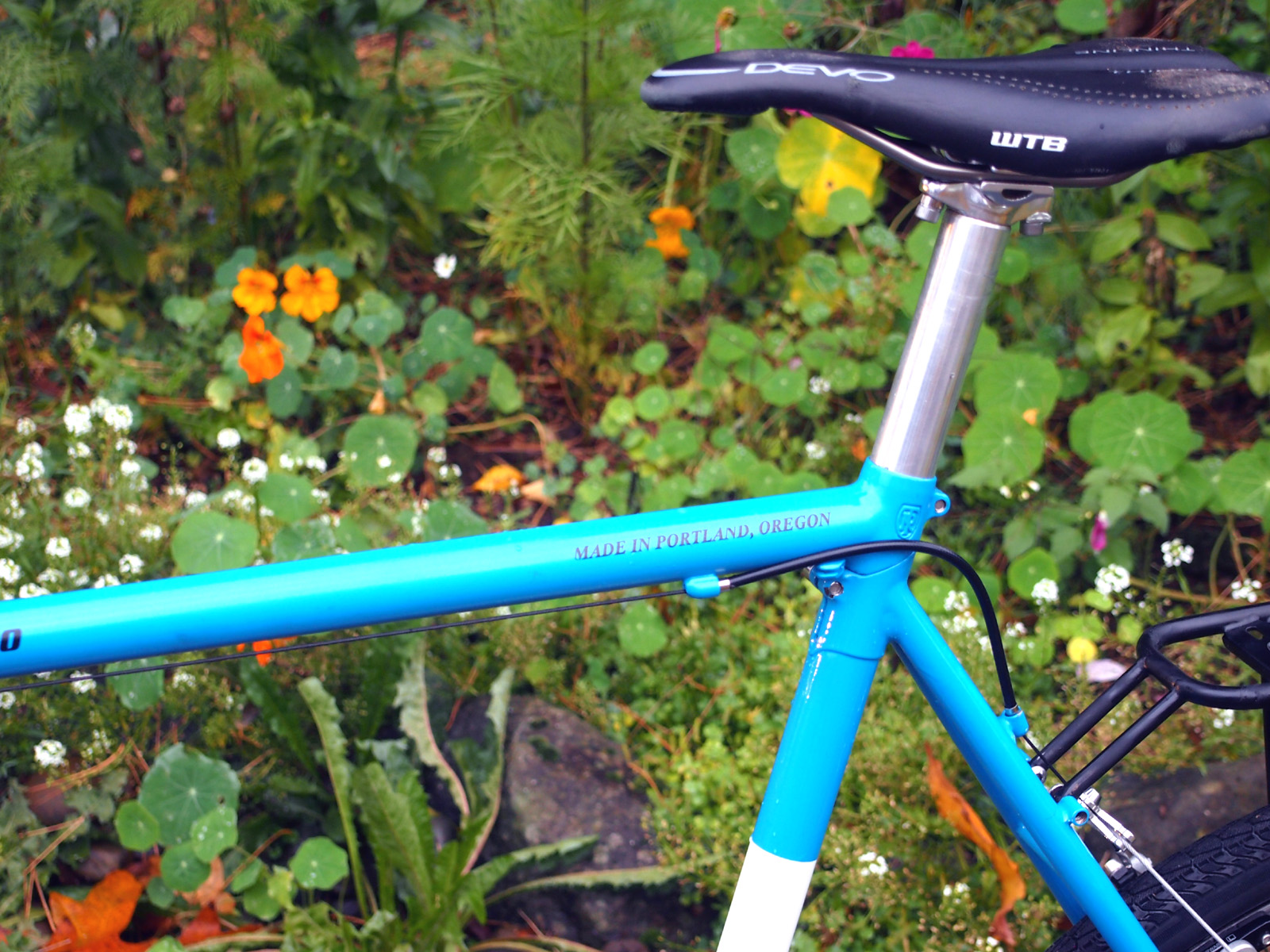 If you ride in Italy you may get a glimpse of this bike speeding by you on a descent ..... or maybe just ghosting along. Or crawling up an interminable Italian hill at 6 KM per hour!

The 1:1 ratio between seat and top tube is a good place to start for men. For most women, a ratio of 1.03 to 1.08, along with 1-1.5 degree less seat tube angle, may be a better starting point. From there I like to allow a little extra top tube length so the rider's body can stretch out a little.

trail 52 mm (I can make a "low trail" fork for those who like to put their heaviest loads into the front panniers.)
Bottom Bracket height 27 cm

geometry can be modified to some degree at no extra cost

2020 base price: $1650 any color in stock, or anything I can mix from stock. This price includes a lot of personal service and custom sizing. It is higher than base for Thursday's other standard models partly because the "breakaway" system is kind of a tough, exacting build.

Options include:
Silver-brazed lugged frame, add $125 to $175
Handmade fork with Pacenti "Roubaix" crown, add $325
The Ritchey suitcase is a little pricey, but well worth it. Last I checked it was looking like $300. Let me get with Ritchey on it.

Build: Thursday offers built up bikes with a variety of top-of-the-line equipment and wheels. I'll do an equipment schedule someday and link it here.

I have been building with vintage equipment for show and demo bikes. Why do I do it? The old stuff works fine; it's hard anymore to find a decent bottom pull front derailleur in 1 1/8" clamp size; 10-speed chain is about the limit that you can break or mend with a cheap, light tool and 9-speed is the oldest cassette standard you can still get with a trick AL spider. The old 4-arm mountain bike crankset with 42-32-22 rings is about right paired with a 12-32 cassette. Race Face Turbines are pretty decent, especially if you can find them with a square taper bottom bracket.