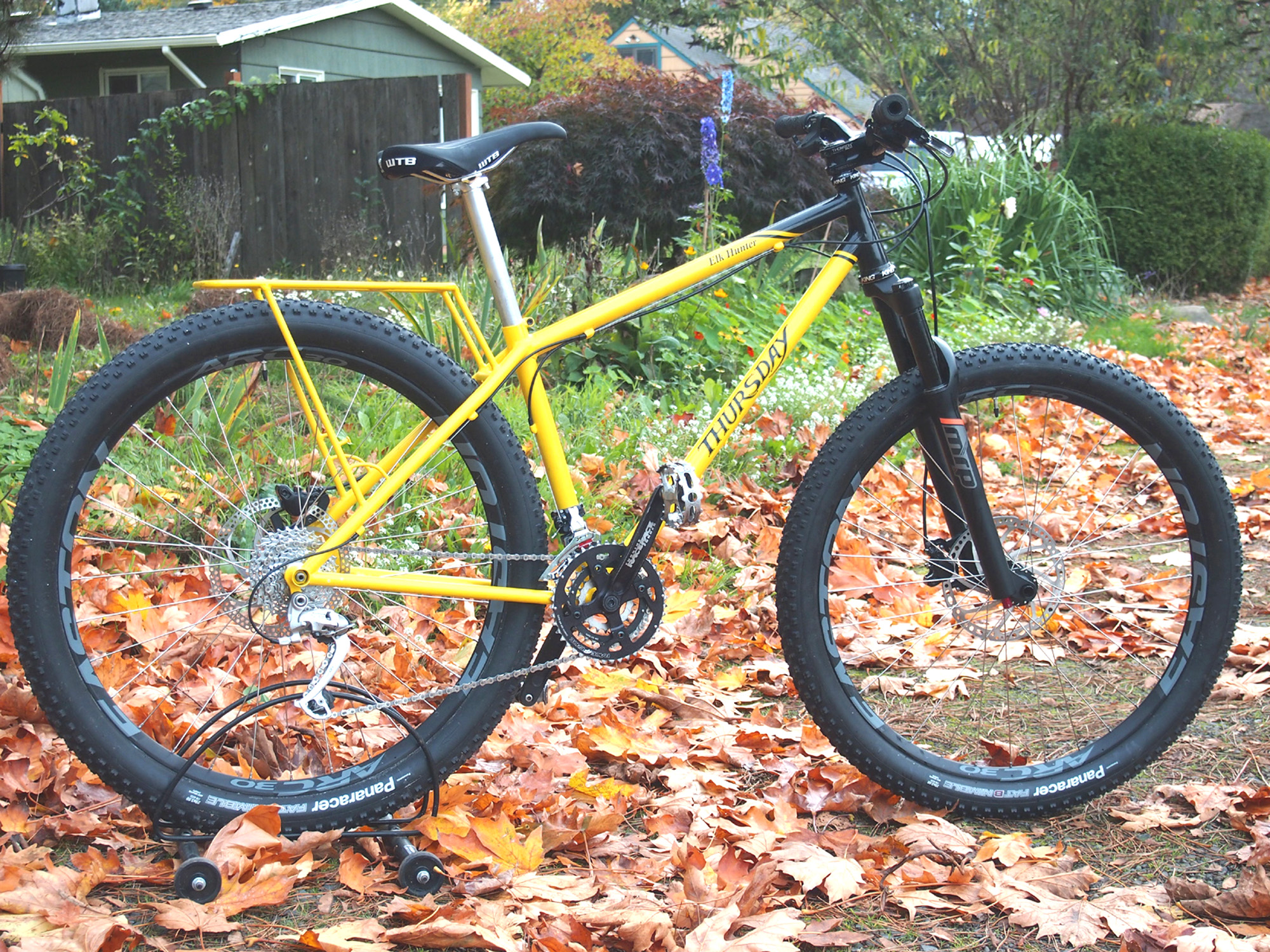 This bicycle started as an idea .... while I was trudging along a closed Forest Service road in the upper Fish Creek drainage, north of the Lochsa River in Idaho. I was looking for elk. Man, there was a lot of country to cover. And that old Mauser was getting heavier by the minute.

Then I saw tire tracks. Bicycle tire tracks. DAMN!! That's what I need. I started thinking about all the deer, elk and moose I've seen riding trails in Idaho, about the way they often just stare at you when you ride up on them, or maybe just amble away. That might be just the thing for elk hunting, right?

I started thinking it out. The bike would have to get me around on abandoned roads and pack trails. It didn't have to be fast but it had to be able to roll over rocks and logs. ALSO it had to be usable as a push-type cargo bike. Let me explain. Hunting is a great activity - it's not a sport, exactly, it's serious business - but it involves a lot of hard work. Especially after you kill an animal. An elk, even if you shoot it through the heart, can make one last dash, 25, 50, even 100 yards. It will usually head down hill or into brush. You have to crawl in after it and butcher it on the spot, then you have to get it out of the woods. Not much of a problem with deer, but an elk is the size of a horse. A lot of hunters end up carrying the elk out in pieces, on their backs, a quarter or a half mile. Maybe more.

My elk hunting bike would have to carry the meat for me. I thought about the Vietnam War, and the way the NVA would bring down supplies on bicycles. They loaded the bikes up and pushed them down the Ho Chi Minh Trail. History was gonna repeat itself courtesy of Thursday! I designed the bike so it could carry a set of giant saddlebags. All you had to do was get the meat to the bike, load it up, and push it out.

So the design was coming together in my mind, actually it kind of distracted me from the hunt. The bike would be kind of a super-muttonmaster, a 29-er with fairly relaxed geometry and a long-ish rear center. It would have a strong, solid, welded-on steel rack like the muttonmaster. The bags would be an epic pair of panniers running from the front end of the bike all the way to the end of the rack. The seat, shoved way down into the frame, would help carry the bags. It would have gears and disk brakes. The rear brake had to be especially powerful to hold the loaded bike on downhill runs. And, it would probably run front suspension.

That's the story, this is the bike.

A prototype, with a light load of backpacks and camping gear. 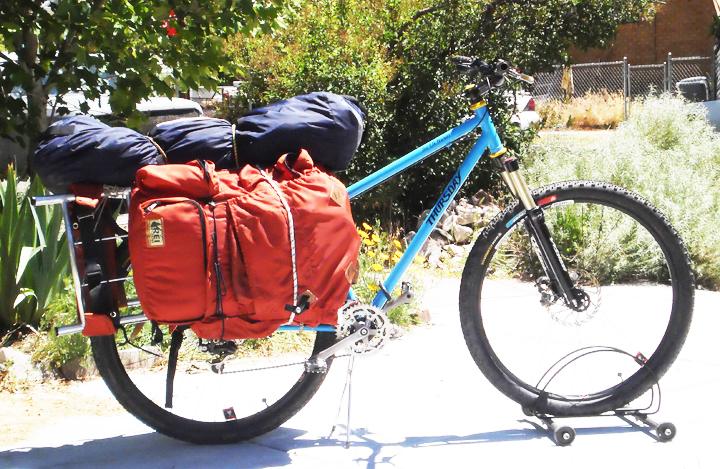 Another view. As you can see, the loaded bike has to be pushed, rather than ridden.

What I learned wringing the bike out: first thing was, the controls needed to be reversed (I'm right handed) so I could control the bike with my left hand while keeping the rifle from falling off my shoulder. Also, I push the bike from the left side and I wanted the rear brake on the left for control on downhill stretches. You wouldn't want your load to drag you downslope to an uncertain fate ....

I adjusted the rack mount position so the seat could kind of nest between the rack platform and the top tube.

This is so a giant set of saddlebags can go over the bike.

The 29 inch wheels are great for rolling down obstacle-strewn trails and forest roads. The year we hunted in the volcanic Centennial Range, with its heavy clay soil, I did learn about mud. Again. I think production models will be built on a wider BB shell with more mud clearance. The newer bikes are being built to accomodate a 3-inch wide 29er tire, front and rear.

Hunting on a bicycle is a little different than I imagined. I have jumped elk while riding, but they ran for it before I could get off a shot. Others may be able to pull this off, or I might catch up to a really dumb elk. Deer, of course, are another matter: they are an order of magnitude less wary than elk. Anyway, the main benefit of the bicycle on the hunt is you can cover so much more ground. And you can travel those roads the forest service has closed off. If I had to guess I would say the bicycle quadruples the area you can hunt.


About the color: you see a lot of camouflage-theme paint jobs on hunting gear. I prefer a bright paint color for two reasons: first, it makes the bike easier for me to find, especially under low light conditions; second, if something happens to me, a search party will be able to spot the bike and look for me.

If you don't hunt you can use this bike for camping. Load it up, push it up any trail where bicycles are allowed. You can carry your load more easily on the bike, or you can carry much more stuff just as easily, compared to backpacking. And once you set up camp, you have a bicycle to get around on, haul wood and water, ride over to that trout-filled lake, and so on. 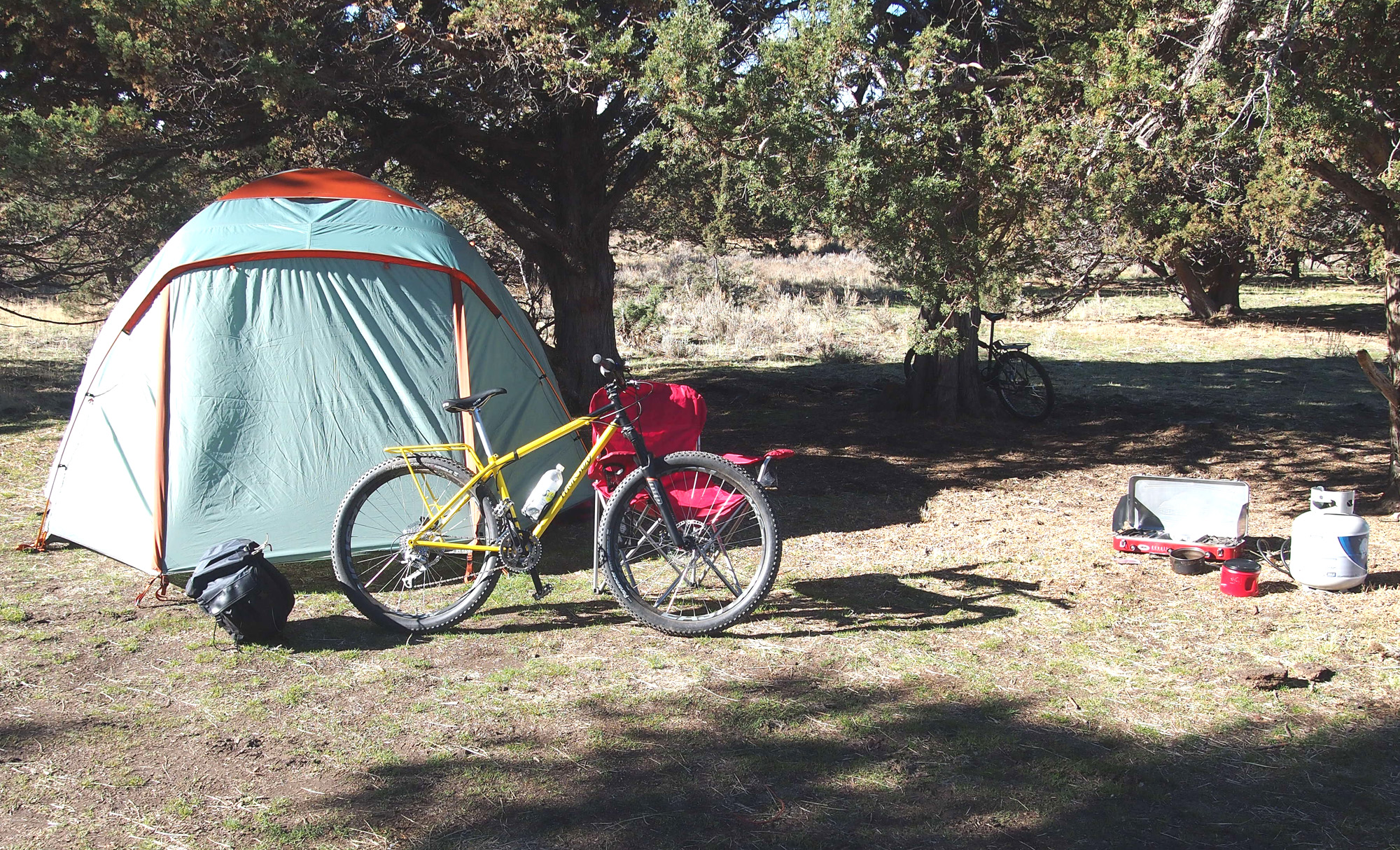 The base frame is welded or fillet brazed (your choice), heat-treated chrome moly (Columbus Zona or TruTemper Verus) with the same tube sizes as the Vida Loca BMX bikes. Chainstays and seatstays are .75" x .035" aircraft grade chrome moly. Cable routing is standard Thursday, triple stops under the top tube, with a top-pull front derailleur.

Standard fork: Thursday has had pretty good luck with White Brothers and Marzocchi. The prototype had a White Brothers Magic 120. It looks as if the new "Stage" model will clear a 3-inch tire, so I'll give that a shot. Thursday gets a pretty decent price from White Brothers/MRP, so he can pass on some savings here.

Bags are optional extra, made to order and priced accordingly